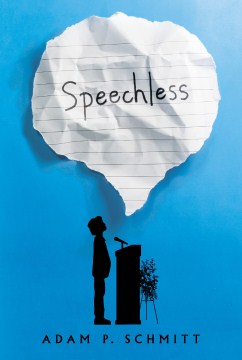 As if being stuffed into last year's dress pants at his cousin's wake weren't uncomfortable enough, thirteen-year-old Jimmy has just learned from his mother that he has to say a few words at the funeral the next day. Why him? What could he possibly say about his cousin, who ruined everything they did? He can't recall one birthday party, family gathering, or school event with Patrick that didn't result in injury or destruction. As Jimmy attempts to navigate the odd social norms of the wake, he draws on humor, heartfelt concern, and a good deal of angst while racking his brain and his memory for a decent and meaningful memory to share. But it's not until faced with a microphone that the realization finally hits him: it's not the words that are spoken that matter the most, but those that are truly heard.

Speechless, by Adam P. Schmitt, is a realistic fiction story told from the perspective of the main character, Jimmy. Jimmy is informed by his mom that he must give a speech at the funeral for his cousin, Patrick. Jimmy struggles with many thoughts throughout the book; he doesn’t understand what goes on or how to act at a wake; he’s terrified of giving a speech with everyone looking at him; he doesn’t have any idea what he is supposed to talk about. But his main struggle is that he never really liked Patrick. All of his memories are of Patrick ruining most events in his life. I really enjoyed reading this book as it shows how Jimmy deals with his current situation at the wake and funeral, while at the same time telling the story through memories.